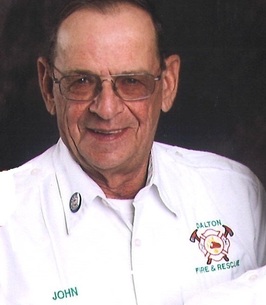 John F. Borges, age 72, of Dalton, NE passed away at his home on Monday, August 15, 2022. His Memorial Service will be held at 10 AM on Wednesday, August 24, 2022 at United Church of the Plains in Dalton with Pastor Leon “Bud” Gillespie officiating. Inurnment will follow at the Dalton Cemetery with honors rendered by the United States Army Honor Guard, the Mintken-Davison American Legion Post #301 Honor Guard, and the Dalton Volunteer Fire Department. Friends may stop at Gehrig Stitt Chapel from 1-6 P.M. on Tuesday to leave condolences for the family. Memorials can be made in John’s name to Dalton Volunteer Fire Department or the Dalton Rescue Unit.
Services will be streamed live on the funeral home’s Facebook page and recorded for later viewing. You may view John’s Book of Memories, leave condolences, photos and stories at www.gehrigstittchapel.com.
Gehrig-Stitt Chapel & Cremation Service, LLC is in charge of John’s care and funeral arrangements.
John was born on February 11, 1950 at Dalton, Nebraska to Franklin and Helen (Schuler) Borges. He graduated from Dalton High School in 1968 and earned an Associates Degree in Welding and Metallurgy from Milford Vo Tech School. John helped on the farm and formed Borges Brothers, farming and ranching with his brothers.
On February 14, 1971, John was united in marriage to Diana Cruise (a date that was easy for him to remember). John served Uncle Sam in the United States Army starting on August 9, 1971 with his Basic Training at Fort Ord in California. He spent 18 months in Panama and 12 months at Fort Knox, Kentucky before being honorably discharged on August 8, 1974, the day that President Nixon resigned (John always said “I guess I was too much for him”).
John returned to farming and ranching with his two brothers Bill and Larry, until Larry’s death in 1991 and Bill’s death in 2010. He farmed and ranched on his own until his retirement in 2015. John and Diana were blessed with two sons: Chad who was born in 1975 and Ryan who followed in 1977. The couple moved into Dalton in 2017 after purchasing a home there in 2016 and remodeling it.
John was a member of the Dalton Volunteer Fire Department since 1979, having served as an EMT on the Rescue Squad until 2016. He was proud to serve alongside Chad and Ryan on the Fire Department and Rescue Unit for many years. John’s hobbies include spending time with this grandchildren, camping, hunting, and fishing.
John is survived by his wife of 51 years, Diana; son Chad and his fiancé Billie and their children: Taylor, Mayson, Logan, Morgan, Hunter, Cooper, and Casey; son Ryan and his wife Krystal and their children: Jonathan, Kaleb, and Aubrianna; sisters-in-law Sharon Borges and Cheryl Borges; brother-in-law Mark Cruise; special friend John Gipfert; and numerous, nieces, nephews, and cousins.
John was preceded in death by his parents, two brothers, father-in-law, and mother-in-law.

All rights reserved. This obituary is also archived at obittree.com